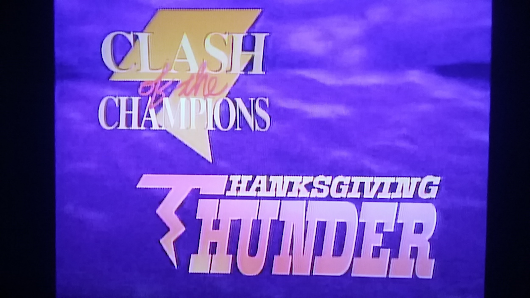 Hello and welcome to another edition of Seanomaniac Wrestling Reviews, the only wrestling review series in the internet that is more polarizing than Brandi Rhodes! It is time for Clash of The Champions XIII: Thanksgiving Thunder! This card looks atrocious like the last Clash, it is filled with squash matches and such. No way is this going to be anything watchable, let’s just get into it!

The Fabulous Freebirds vs The Wide-Eyed Southern Boys

Garvin and Smothers to start, side headlock from Garvin. Smothers leapfrogs and drop-downs before landing hip-tosses and dropkicks to The Freebirds and Lil’ Richard. Hayes comes in, they batter Smothers before we see the crossbody spot that we saw the last time we saw them wrestle. Side headlock from Hayes, arm-drag and scoop slam from Smothers. Scoop slam for Garvin, double clothesline for The Freebirds. Hayes catches Smothers with his quick left, Smothers takes a bump from the apron to the guardrail. In comes Garvin, scoop slam by Garvin. Two slams from Garvin, Smothers lands a sunset flip for two. Clothesline by Garvin, Garvin climbs high but Smothers slams down Garvin. The referee misses the tag to Armstrong, Armstrong says screw it and lands a double clothesline. Lil’ Richard is on the apron, Garvin is back body-dropped onto the ramp. Armstrong dives onto Garvin, Lil’ Richard trips up Smothers who was running the ropes and Hayes lands the DDT for the win.

Thankfully quick, the two teams can work well together having done so at a previous Clash but I have no interest in seeing the two do battle for anything longer than 6 minutes, let’s switch it up in the tag team division!

Winners: The Fabulous Freebirds over The Wide-Eyed Southern Boys via DDT!

Rematch time, Landell tries to chop down Pillman but Pillman uses his speed with a backslide and a clothesline. Landell is on the ramp, Air Pillman from the youngster. Pillman wants a piledriver, Landell reverses and lands a big right before a clothesline sends Pillman back into the ring. Knee sends Pillman to the floor, Landell sends Pillman into the ring-post. Chops in the corner, whip to the opposite buckle before Pillman lands a hip-toss and a dropkick. Springboard crossbody from Pillman to the floor, knee from Landell. Knee to the head, Landell lands a kick to the ribs and goes to the abdominal stretch for leverage. Pillman fights out and tries a middle rope crossbody but gets caught and Pillman eats a back-breaker for two.

Pillman lands a massive back body-drop, Landell puts Pillman in the corner looking for the superplex but Pillman shoves down Landell and lands a Diving Crossbody for the win!

Not much difference between this and their previous encounter, Landell takes most of the match and it is boring before Pillman does something interesting to engage the audience, Pillman seems lost in the shuffle for someone who is so popular.

The Cat vs Brad Armstrong

Curtis Hughes is here against jobber to the stars in Brad Armstrong. Cat shoves down Armstrong, more lock-ups before Cat whips Armstrong. Armstrong ducks the clothesline and lands the dropkick, side headlock into a wristlock by Armstrong. Counter from Cat, Armstrong tries a crossbody but Cat lands three back-breakers and poses for the fans. Cat works the back of Armstrong with forearms, hard Irish whip to the buckle. Bearhug from Cat, Armstrong fights his way out. Shot to the ribs, dropkick by Armstrong but Armstrong misses the second dropkick. Torture Rack and The Cat wins! Squash City right there!

Winner: The Cat over Brad Armstrong via Torture Rack!

The Z-Man vs Brian Lee

Shoulder block from Brian Lee, side headlock from Z-Man. Enzuigiri to the back of the head from Z-Man, lock-up and knee from Lee. Whip to the buckle, Zenk leapfrogs over and lands a hip-toss. Zenk goes high and tries a diving crossbody but misses big time. Lee eats a dropkick from Zenk, Lee wants a break. Zenk superkicks Lee in the face, scoop slam and Zenk climbs high. Missile dropkick by Zenk for the win. Fuck me that sucked!

Winner: The Z-Man over Brian Lee via Missile Dropkick!

Qualifying match for the Pat O’Connor Memorial Tournament, Krueger slaps Kalua before Kalua lands a knee-lift, DeKlerk has his arm worked before a roll-up. DeKlerk taunts the crowd, Kalua grabs a wristlock. DeKlerk almost roll-sup Kalua again, two for DeKlerk. Springboard moonsault from DeKlerk, drop toehold into an elbow drop from Krueger. The Beast and Krueger are in, clubbing blow and flying clothesline by The Beast. DeKlerk comes in and offers a handshake, powerslam and corner splash by The Beast before DeKlerk lands a massive clothesline after flipping away from The Beast. Two diving axe handles, Beast counters with a powerslam. Krueger breaks it up, Beast lands an atomic drop. Match breaks down, Beast wants a powerslam but Krueger dropkicks DeKlerk onto The Beast for the win. Another shite match!

Winners: DeKlerk & Krueger over The Beast & Kalua via Dropkick!

Who? Luger kicks us off by brawling with the Motor City Madman. Madman clubs Luger, Luger lands a crossbody for two. Lariat and an elbow to the face, Madman is on the apron. Madman wants a suplex to the ramp but Luger blocks, Luger brainbusters Madman into the ring. Scoop slam but the elbow drop misses, sidewalk slam from Madman. Luger blocks the back-breaker, clothesline from Luger for the win. Another shitty match, kill me already.

The Nasty Boys vs The Renegade Warriors

Saggs to start with Mark, clean break from Mark. Saggs lands a cheap-shot, forearm shots from Saggs. Tag to Knobbs, double suplex on Mark Youngblood. Knobbs is unaware of the blind tag, Chris lands a flying crossbody and works the arm. Diving axe handle from Mark, diving axe handle from Chris. Knobbs clubs the crap out of Chris, Saggs comes into the match. Arm-drags and wristlock from Chris, tag to Mark who works the arm. Saggs grabs the hair, Mark is thrown over the top rope. Knobbs tosses Mark into the guardrail, Saggs and Knobbs work the arm of Mark. Knobbs distracts the referee so no tag for Chris Youngblood. Shoulder-breaker from Saggs but wait here we have The Steiners, we have a brawl.

Winners: The Nasty Boys over The Renegade Warriors via DQ!

Sid Vicious vs The Nightstalker

Sid borrowing from Wallstreet’s wardrobe, Nightstalker wants a test of strength. Sid wins and kicks Stalker, shoulder block and both collide before Stalker has the bearhug. Sid escapes but Stalker works the ribs with knees, Sid lands a massive belly to back suplex on Stalker. The Cat is here, Nightstalker has his axe and misses, Sid clubs people with the axe and wins.

What was this? Sid is the babyface? Is there something going on with The Horsemen? Where are they to help Sid? Nightstalker and The Cat together? So many bad matches back to back, this is atrocious.

Winner: Sid Vicious over Nightstalker via Axe To The Neck!

The Steiner Brothers vs Magnum Force

Scott wrestles one of these jobbers, Jobber 1 is not happy with Scott’s attacks. Scott trips up Jobber 1 and stomps on him, tilt-a-whirl slam and powerslam from Scott. Knee and tag to Rick, Jobber 2 tries to pepper Rick with rights. Rick lands a big right, Steinerline. Tag to Scott, Frakensteiner for the win. Joke of a show ladies and gentlemen!

Winners: The Steiner Brothers over Magnum Force via Frankensteiner!

If Flair wins, they receive a championship match and Teddy Long becomes the chauffeur of Flair while if Reed wins, they receive Flair’s Rolls Royce and yacht. They lock-up, Reed pushes Flair to the corner. Clean break, side headlock and shoulder block. Lock-up and knee to the ribs, chops in the corner before Reed chops back at Flair. Reed lands rights and lefts decking Flair, military press slam by Reed. Flair and Reed trade pin-falls, backslide for two. Flair begs for mercy, right hands by Reed. Ten punches from Reed, hip-toss from the corner and a dropkick from Reed. Eye-poke from Flair, kicks to the ribs from Flair. Gut shots from Flair and big chops. Flair starts stomping the leg, Reed is tossed illegally to the floor before Anderson lands a clothesline.

Flair chops and chops, Reed chops and chops back. Right hands and a stinging left by Reed, Flair comes forward and is battered. Flair flop, Flair begs for mercy. Flair flip to the floor and Simmons batters Flair, Flair misses a knee-drop and Reed applies the figure four. Anderson pulls Flair into the ropes, Flair is on the apron. Flair tries to block, Reed suplexes Flair into the ring for two. Reed slams Flair, Reed misses a diving elbow drop. Right hands to the head of Flair, Flair complains of the pain. Flair chops back at Reed before Reed decks Flair with massive rights and lefts, military press slam again. Right hand from Flair, Teddy Long places the foot on the ropes. Reed lands more rights and lefts, back body drop from Reed. Gorilla press slam again for two, Anderson pulled the referee to the floor. Diving Shoulder Block connects from Reed, Teddy Long is distracting the referee. Eye-rake from Flair, Reed is back-dropped onto the referee, Simmons clotheslines Flair. Anderson has a chair and waffles Reed in the spine but Simmons does not see it, Flair covers for the win.

Decent match, not Luger or Hawk or Nikita levels of good but Reed’s best singles performance in the ring since joining the company, Flair and Reed have a match that blows everything else out of the water on this card but it is not anything great. It held my attention which is good because I think I was going to fall asleep before this, credit to Flair for making me care again when Reed was in the ring by himself without Simmons.

That was WCW’s Clash of The Champions XIII: Thanksgiving Thunder and this might be the lowest point of checking out WCW in the history of my reviews, the previous Clash was rough and The Great American Bash had some head-scratching matches in there but these are glorified house-show level matches on this card, magnum force and renegade warriors and matches not lasting over 6 minutes? We are trying to build towards Starrcade and not one thing on this show made me interested to see that show, I am not excited for the tag tournament, I am not into whatever is going on with Sid. I don’t care about The Freebirds battling Morton & Rich or Sting’s battle with The Black Scorpion. Where is The Dudes with Attitudes? Why is Arn Anderson never defending his Television Championship? Where is Barry Windham? What direction are we heading with this company? Questions and questions but mostly unanswered but thanks for reading and remember: there’s always another night!