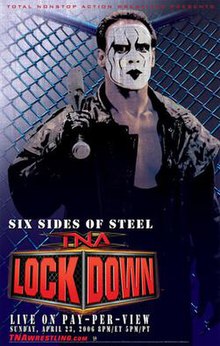 Hello and welcome to another edition of Seanomaniac Wrestling Reviews, the only wrestling review series on the internet that misses Aidan English's hair! TNA's Lockdown 2006, TNA's pay per view where verything is inside of a cage, Christian vs Abyss. Sabu vs Samoa Joe and Team Sting vs Team Jarrett! But with every match being inside a cage, will we all care? Let's find out!


Lethal is grabbed by Black Tiger, Irish whip is reversed. Flapjack by Lethal, Minoru dropkicks Lethal. Shelley faceplants Minoru, Dutt nails Goto with an enzuigiri. Shelley nails Dutt by mistake with a superkick, Lethal is all alone. Kick by Minoru, Tiger Suplex and it's done!


Fun stuff in this one, Team USA got to strut their stuff against the bigger stars on The New Japan teams, you had false-finishes and all sorts going on in this match. Really fun opening match, wish we could see some singles matches between these guys!


More kicks, suplex for two. The two trade chops, Senshi nails a double chop and a stomp. Two for Senshi, bodyscissors from Senshi. Daniels rallies and nails a powerbomb on Senshi for two, Senshi looks for a suplex. Daniels blocks, Senshi sidesteps Daniels. Running dropkick by Senshi for two, chops by Senshi. Daniels ducks a chop for a death valley driver, BME for two. Both men climb the cage, Daniels bangs Senshi's head off the cage wall. Super Angel's Wings is blocked, Daniels is shoved down. Double foot stomp misses, STO by Daniels. Senshi blocks the angel's wings and backdrops Daniels while using the ropes for leverage.


Not the heated war I could have wanted, the fans welcome back Senshi but needs to work on his wrestling gear. Baggy Nike shorts are not wrestling gear but yes, the match was fine in parts but if you want Senshi to come back strong, a big win over Daniels would be great. However, a roll-up using the cage I do not see that as a great comeback for Senshi.


Winner: Senshi over Daniels via Roll-Up!


Well, Machete is gone. Hernandez is in, we have the arm wrestling match. Konnan makes excuses, good stuff. Downhill from there, this feud went from personal to joke. Bullet Bob beats Konnan, Mexicans are not good at arm wrestling. LAX and The James Gang have words, LAX are suspended if they do not take a whipping. They take the whippin, waste of time. DUD!


Pins and submissions are the ways to eliminate until there is two, the final two can only win by escape. Williams and Shark Boy begin, they tarde holds. Slap by Williams, Williams stomps all over Shark Boy. Shark Boy comes back with chops, ten punches. Biting, Williams rakes the eyes. Here comes Puma, dropkick by Shark Boy. Hurricanrana by Shark Boy on Puma, missile dropkick.


Tag to Skipper, spinning kick by Skipper. Back drop by Skipper, twisting leg drop for two. Skipper climbs the cage, Shark Boy nails a Russian Legsweep off the cage. Williams comes in and nails The Canadian Destroyer on Shark Boy for the elimination, Shark Boy is first out.


Sabin and Williams trade moves, tornado DDT by Williams for two. Straight-jacket hold by Williams, Sabin tags Stevens. Stevens throws Puma into the cage, everyone annhiliates one another. Stevens is on top of the cage, Stevens does a shooting star press off the cage. Skipper drills Stevens with Sudden Death for the elimination. Williams rolls-up Skipper with ease with a sunset flip. Cradle Shock on Puma and Puma is out!


Williams and Sabin are the last two, you know the other guys in the X-Division. Sabin tries escaping, Williams chases Sabin. Sunset flip powerbomb is blocked, Williams leg drops Sabin. Boot by Sabin, Williams is in the tree of woe. Running dropkick by Sabin, Sabin climbs the cage. D'Amore has Sabin stuck on the cage, Williams and Sabin brawl on the cage. Williams tries to jump to the floor but D'Amore catches him while Sabin jumps down for the win.


Standard X Division Match, nothing that we have not seen before. Fast-paced action that grabs your attention but fast paced eliminations suck you out of it when it comes down to the only two worth a damn and we have a comedy bunder finish from Team Canada. Been done to death, I beg you for something new!


Sabu comes right at Joe, dropkick to the knee. Camel Clutch, Joe kicks back at Sabu. Chair to the head by Sabu, Joe shakes it off and punishes Sabu. Front chancery from Joe, more stiff kicks. Sabu is bleeding, chops and kicks followed by a knee drop. Sabu brawls his way back in, Arabian Facebuster. Triple Jump Leg Drop, Sabu has a spike. Joe counters with a cross armbreaker, Joe attacks the arm of Sabu. Senton on Sabu, Joe and Sabu meet on the cage. Samoan Cutter by Joe for two, Joe misses a knee drop. Triple Jump Moonsault is stopped as Sabu is hit with the chair, Muscle Buster.


That was disappointing, it never really got going for me. There was action and some nice spots but it seemed all a bit basic and contained when all was said and done, I also am surprised to see Joe as champion again like why would Daniels win it at the last pay per view? Anyways, not a fan of this match.


Spike is here, sorry Brother Runt. It is Capture The Flag, Brother Ray and Roode brawl while A1 and Brother Devon brawl. Tornado rules, everyone is brawling. Roode and Brothe Ray fight on the cage wall, Boçrther Ray Bomb off the top rope. Devon Russian legsweeps A1 off the cage, Runt double stomps Young. Runt eats a spinebuster from Roode, sidewalk slam and leg drop by Team 3D.


The referee gets squished off an Irish whip, reverse 3D by Team 3D . Double flapjack on A1 and diving headbutt on Young. American Flag is captured by Team 3D, A1 clotheslines Team 3D. Runt is alone against Team Canada. Powerbomb on Runt, Young is placing the flag back up, D'Amore opens the cage and pulls out a table. Runt is on the table, Young misses a top rope elbow drop. Low blow to A1, Acid Drop on A1. Roode battles but eats the cage, 3D on Roode. Runt climbs and gets the flag.


It was grand, nothing special and nothing I will remember anytime soon. Team 3D do all their regular stuff, Team Canada are beyond stale and they have a match where Team Canada fuck things up again and manage to lose the match.


Winners: Team 3D over Team Canada via Capturing The Flag!


Make it two times, chest chops from Abyss. Christian rallies, forearms to the face. Abyss clotheslines the referee, two bumps in back to back matches. Christian nails a diving tornado DDT, cover but no referee. Micthell tosses Abyss the championship and cane, Christian dodges and nails The Unprettier for two. Frog Splash off the top of the cage, 1........2.... Abyss kicks out! Unprettier attempt is blocked for Shock Treatment. Abyss pulls out his thumbtacks.


Abyss is spreading the tacks, Christian smacks the cane over the back of Abyss. Christian is knocked from the cage by Abyss, Abyss slams the referee into the cage. Abyss and Christian brawl atop the cage, Abyss wants a chokeslam. Sunset flip powerbomb onto the tacks, no referee. Two for Christian, Black Hole Slam for two. Abyss has another bag, more thumbtacks. Chokeslam is avoided, Unprettier on the tacks.


Was there any ever doubt that Abyss would eat an Unprettier on the tacks? I mean, it happens so God damn often with this company. Abyss takes out tacks, Abyss eats said tacks. It had some great spots but it is every Abyss match ever and just like the X Division matches and Team Canada, I require something new because Abyss is wrestling the same match over and over.


Simple formula, two men start and we continue until everyone is in the match. You can then win by pin-fall or submission, Team Jarrett win the coin toss so they will have the man advantage. Harris and Styles begin, Harris waffles Styles, dropkick by Styles. Harris spears Styles into the cage, fallaway slam onto the cage. Drop toehold by Styles and a knee drop on Harris, Styles kicks the head of Harris. Leaping splash into the cage on Harris, Harris is banged off the cage. Harris catches Styles for The Catatonic.


Styles counters the catatonic for The Styles Clash, here comes James Storm. Styles dropkicks the cage door into Gail Kim's face, Storm slams the door on Styles. Styles meets the cage wall, Eye of The Storm. Styles is bleeding, Styles battles AMW. However, Hart Attack from AMW. Rhino is in for Team Sting, Rhino throws haymakers at AMW. Storm avoids the gore, Rhino is down. Harris clotheslines Styles, Jarrett comes and is waffled by Team Sting. AMW double team Styles and Rhino, Team Jarrett are in control. Killings comes in to even the numbers, Lie Detector for Jarrett. Osaka Street Cutter by Killings, Styles is on top of the cage.


Tower of Doom spot, Steiner comes in and suplexes everyone. Steiner talks trash with everyone being busted open before the man called Sting enters the chaos. Team Jarrett eat forearms and cage walls, inverted atomic drop. Stinger Splash on Team Jarrett, the roof comes down as there are weapons everywhere. Storm and Styles climb onto the roof, Gail Kim is climbing the cage. Jackie Gayda rips off Gail's skirt.


Storm sets up a table, Styles nails a Pele on Storm. Jarrett has his guitar, Sting has a guitar. Jarrett has his guitar smashed, Steiner saves Jarrett from Sting. Styles sets up a ladder on the roof, Storm is on the table. Styles splashes through Storm on the table, everyone takes turn hitting finishers. Steiner gets caught by Sting in The Scorpion Death Drop, rhandcuffs to the head by Harris to Sting. Scorpion Deathlock by Harris on Sting, Sting reverses the hold and applies it to Harris for the win.


That was a lot of fun, similiar to War Games, The Lethal Lockdown match has a simple story of the heels beating up the babyfaces until the teams are even and all hell breaks loose. Jarrett, while being on my most hated list for his preposterous main event matches in TNA is perfect coward here shitting himself when Sting comes in, I would have liked to seen more interactions between the two but it was clear they were saving it. Styles was great fun in this match too, already a huge star by this point I would just pull the trigger on Styles or Joe.


This was TNA's Lockdown of 2006, a very average show in the books for TNA. I thought there was nothing of substance on this pay per view when wall was said and done, what did Senshi do in his comeback match? What did standout about The World Cup matches? What did Steiner do for Team Jarrett? Why bring in Sabu against Samoa Joe for a match like that? The main event was fun, they saved Sting vs Jarrett and I want to see it but I do not know how much more I am looking forward to when it comes to next month and that is not a good thing. It is one thing for some acts/gimmicks being stale, it is another thing if the product is stale. Thanks for reading and remember: There's always another night!