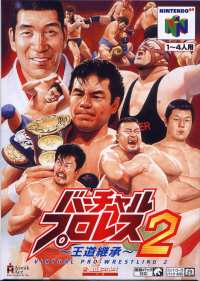 Welcome one and all to another edition of Sean's Wrestling Reviews!!! Today's review will be of arguably the greatest wrestling game of all time, Virtual Pro Wrestling 2 Odo Keisho released January 28th 2000 and published by AKI for the N64. To say the least, this game is awesome and I will do my best to describe and analyse why this game released only in Japan. is the best wrestling game of all time and why you should go out of your way to play this game. Let's waste no more time and get straight into the action!

This game holds over 70 wrestlers with the option of creating a further 16, the games includes various federations from all over Japan such as All Japan, New Japan, Michinoku Pro, Frontier Martial Arts, Legends from these organizations and even shoot fighters from their respective promotions. The game has an All Japan license so every wrestler from that organization has their name and attire corrected while the other wrestlers have their names and attires mixed up but there are plenty of guides online to guide you to ensure you can have every wrestler looking correct. If you are struggling to correct every one's appearance, fear not as I will include a link to a series on youtube which goes through each character and gives their correct appearance =) (https://www.youtube.com/watch?v=nr7fPagK3z8 ) Every big name from Japan is in the game, the likes of Misawa,Kobashi Great Muta Jushin Liger and even American favorites such as Vader, Mike Awesome and Terry Funk make their way into the game. To give you an example of the sheer depth of this roster, you could create every match from the 1999 AJPW World Tag League, the 1999 G1 Climax, the 1999 Best of The Super Juniors, Every big match from FMW and the big shoot fights such as Rickson Gracie vs Nobuhiko Takada or Bas Rutten vs Masakatsu Funaki. The roster is perfect for the years 1996 to 2000 and with the ability to create wrestlers and alter appearances, you could travel further back in time and create matches including Terry and Dory Funk, Bruiser Brody, Dr Death and Terry Gordy and the almighty Jumbo Tsuruta. If you are a fan of Japanese wrestling during this time period, this is the game for you

The Gameplay is almost identical to the American counterpart of this game, WWF Wrestlemania 2000 but Virtual Pro Wrestling 2 makes a few tweaks to the gameplay. The first change is the pacing of gameplay, if you play this game or its predecessor you will notice both these games are faster than WCWNWO Revenge and WWF No Mercy. Personally, I find it hard to go back to the American games after playing the Japanese games as I feel they are too slow and I am use to the chaotic fun of the faster games. Another gameplay tweak is the introduction of running grapples. From DDTS to Hurricanranas to Giant Baba's hangman neckbreaker, this game has a multitude of running grapples and they can be hit from the side as well as from behind. There is nothing more satisfying than countering a grapple and unleashing a uranage from Hiroshi Hase or an exploder suplex from Jun Akiyama. The final gameplay tweak is the unique reversals that can be executed in the game and the increased damage for certain moves. In puroresu(The Japanese name for professional wrestling) there is a unique characteristic  belonging to  each  of the wrestlers called their"fighting spirit". In basic terms, the Japanese believe that even when a fighter's body is broken, they can still continue to fight due to their spirit and will to succeed. It is a stable of Puroresu and makes it into the game in the form of reversals for certain characters. For example if a superstar such as Kenta Kobashi is suplexed on his head, instead of just blocking the move, he will take the German suplex and spring back to his feet delivering a devastating clothesline to his opponent which looks awesome during gameplay and really adds to the excitement of a match. Other examples include Misawa's roaring elbow, Kawada's boot to the face and Vader's body attack. As mentioned earlier, certain moves cause more damage than others in this game and there are also super finishers which exist in the game. Moves that do more damage are moves used constantly during this period in puroresu to almost injure the opponent, they mostly include moves that are damaging to the neck so the likes of german/tiger/half nelson/exploder suplexes do extra damage as they were used at setups for wrestlers finishing moves. The super moves are assigned to certain wrestlers and these are the moves they would use if all else fails and are meant to end the match. For example, Kobashi's regular finisher would be a Burning Lariat and if he failed to defeat his opponent using this and nothing seemed to be working, he would turn to his ultimate move, The Burning Hammer. This is Kobashi's super move and it is awesome, if you haven't seen it before, you need to it is that awesome. The super moves can only be executed once(that's what makes them so special) and the opponent usually doesn't kick out.

This game is full of unlockables, attires, masks, face paints, they are all to be unlocked in the game's main mode Royal Road Succession. This mode is your career mode, you fight through the AJPW roster while competing in tournaments that are held throughout the year. The ultimate goal is to win the triple crown championship(All Japan's Heavyweight Title) and defend the championship in the Tokyo Dome. To unlock everything in the game requires multiple playthroughs of the long and repetitive career mode but the pay off is worth it as you can unlock so many different characters and items. I still cannot believe how much they packed into the cartridge! Other game modes include single tournaments like the Champion Carnival, tag tournaments like the World's Strongest Tag League and create a ppv event so if you want to recreate a certain AJPW Budokan Show or a NJPW Tokyo Dome show this is the mode for you. You can choose the name of the show, the date and time in which it takes place and you can choose the arena. The arenas in this game include The Tokyo Dome, Budokan, Kawasaki Stadium and Korakuen Hall. Each is unique in its appearance and really adds to the authenticity of the game. There is also an edit mode where you can alter appearances of wrestlers and create wrestlers not in the game. You can also look at a progress tracker of your play in the game, you can see which wrestlers you use the most often and your wins and losses. The layout is the exact same as WWF Wrestlemania 2000 so you should have no problem navigating even if its in Japanese. If you do have issues, there are plenty of guides online to get you up and running. Did I mention there is shoot fighting is in this game? Hell Yeah so if you don't want to put on a five star classic between kawada and misawa, you can have your own shoot fight with tkos, submissions and specific rules regarding takedowns and ropebreaks. It may not be as in depth as EA's UFC games but for the year 2000 this was awesome and I think it is still fun to play to this day.

More comparisons to Wrestlemania 2000 here(Don't you say just hate lazy writers?) The graphics do not really hold up overtime but it does not hurt the appeal of the game in the slightest. Every wrestler looks like who they are supposed to be including the wrestlers who are not even licensed. Certain wrestlers have their respective themes, the quality is good and there are ring introductions for each All Japan wrestler which is a really nice touch. They even include ring introductions for All Japan wrestlers who are not in the game but can be found in create a wrestler such as Kikuchi, Honda and Inoue. It really is the small things that add up when it comes to this game. The move animations are great as every move looks like its real life counterpart, the reversals are smooth and the gameplay is fluid. The noise of the crowd is great as is there stomping of the feet when there is a dramatic kick out at two which is another nod to a stable of Japanese wrestling. My only criticism of the sound for this game is that I wish more wrestlers had their themes, it is by no means a game breaker but it would be nice to have more options when it came to wrestler's themes instead of hearing two generic rock themes over and over again like in WCW/NWO Revenge.

If you are a fan of the AKI wrestling games, you need to play this game yourself to see why this is the greatest wrestling game of all time. You do not have to take my word for it , the likes of AJ Styles and Samoa Joe speak very highly of this game. This game has everything you could want out of a wrestling game. An extensive and deep roster filled with wrestlers you will want to play as or get to know, exciting moves that are pulled off in a realistic manner and various game modes and unlockables to add replay value to the game so that you keep on coming back for more. This game is not expensive on Ebay and you only need a N64 passport or Japanese console to play it, it is worth the investment and you could become a fan of Virtual Pro Wrestling 2
Posted by Sean O Connor at 21:09