Creative Has Got Nothing For You: Number 3 Paige 
Welcome one and all to another edition of Creative has got nothing for you, a series which looks at various wwe superstars and divas who many fans feel are being misused while trying to give potential stories for each superstar to get back on track to becoming a force in the sport. Today, we take a look at the former anti diva Paige who has lost a tonne of momentum since her debut on the main roster in 2014. From getting demolished by The Bellas to becoming an afterthought in The Divas Revolution, things need to change for Paige and I just might have the answer..... So let us waste no more time and try to figure out what would be best for business.

Oh yes, you see if Paige is to recover from her better slump, what better way to make her a badass again that allowing her to become the first ever Paul Heyman Girl. Think about it, Paige originally stood for everything a typical Diva was not, she was the anti diva, it was not glitz and glamour, it was Paige Turners and ass whoopings damn it! With the endorsement of Paul Heyman as a manager, Paige could return to her roots as the Anti Diva who runs through the current roster. Plus, imagine the promos of Heyman ripping on all the barbie dolls of the division, imagine Heyman running down The Bellas or Rosa Mendes or Eva Marie if she makes it to the current roster. The potential for a feud involving the first ever Paul Heyman girl is quite high and Paige could be the perfect candidate for that experiment.

Can you believe she only held this belt once?

Natalya, the only diva on the roster who can be given nothing but still put on one hell of a match while maintaining  credibility. I feel WWE really missed the boat on Natalya but that's a story for another time. So as mentioned previously, Paige should tear through the divas who are simply just there on the roster. The likes of Alicia Fox, Tamina Summer Rae all come to mind. You could through Brie Bella in there too as she is on her way out of the company so she might aswell put over talent which is sticking around. Anyways, Paige finally finds a roadblock in Natalya, the Diva who can out wrestle Paige, the Diva who can beat her and The Veteran Diva on the roster who will not be beaten so easily. Paige continually calls out Natalya, noting the failures of members of the Hart Family when it comes to gold besides Bret, brining up that Paige one the championship more in one year than Nattie has her whole career.

Heyman really lays into Nattie, claining that she is a dinosaur among the crop of current Divas, her time has past her by. She ,ight have experience on her side but she will have no answer to The Rampaige or the PTO. The pay per view comes around with both women having a great match. Nattie locks int he sharpshooter before Paige powers out hitting a superkick which sets up a Rampaige for the victory. With this victory, Paige has killed off the last of what she sees as the Divas and now turns her attention to championship gold in the form of the Divas Championship. 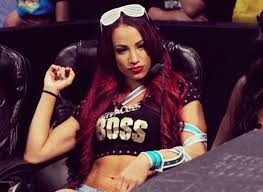 The Divas championship is held by none other than The Boss, Sasha Banks. The future of the business who will without question carry this division for the next couple of years. Things are looking bright for the Divas as Banks in not afraid of Paige nor her recent streak. Paige laughs off the threat of Banks by reminding her that before she was tearing it up in NXT with Becky and Charlotte, it was Paige who was the first ever NXT Women's Champion. Obviously, Banks is the babyface by this time while Paige is clearly the heel. Paige berates Banks week after week with cheap attacks and a barrage of insults. We want to keep Banks as strong as possible as she is the face of the division so before the PPV, Banks is assaulted backstage by the challenger who injures Bank's arm.


It makes sense as Banks needs her arms to lock in the Bank Statement and it also softens her up for the PTO. Coming into the match for the title, Sasha has her hand heavily taped up, she is a wounded animal and Paige smells blood. From the beginning it is a systematic breakdown of Banks by Paige who zeroes in on the injured arm of the champion. Back and forth they battle before Paige finds herself locked in the Bank Statement. However, Sasha does not have the strength to lock in the move fully so Paige battles out laying her out with a superkick before locking in the PTO. Banks struggles, fighting for all she has but in the end succumbs to the pain as her hand is too hurt to continue. She taps outs and Paige is crowned the new champion while both women look like warriors coming out of this match. 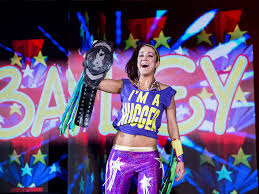 Please Vince do not screw this up

Having defeated the champion, Paige gets to work building a credible reign as champion. The Divas championship is replaced by the newly reinstated Women's Championship while Paige knocks back challengers such as Becky Lynch and Charlotte. Heyman proudly boasts of his client's conquering of the division while asking is there anyone left? Can anyone stand up to the might of the champion? Cue Bayley's music, the most lovable character in all of wrestling and the closest thing WWE has to another John Cena. Sasha may carry the division but Bayley will surely be the most popular Diva of the next few years if she is provided with good feuds. Obviously, Paige scoffs at the sight of this squeaky clean happy go lucky clueless buffoon who thinks she is championship material. Paige offers Bayley the championship match while extending her arms for a hug, overjoyed Bayley goes to hug Paige but gets planted with The Rampaige.


A tag match is set for later in the night as Paige and Charlotte take on Bayley and Sasha Banks. Bayley shocks the WWE Universe by pinning the champion with a small package that night. Paige is furious she cannot believe that Bayley had pinned her in the middle of the ring. The next week Paige takes on Sasha Banks in a singles match, the referee is knocked out during the match so Paige goes to the outside to grab a chair from ringside. Bayley rushes to ringside grqbbing the chair, allowing Banks to pin the champion. The champion has been beaten twice in two weeks after going undefeated for months on her path to the championsip. Slowly but surely, the once calm and composed champion is starting to show signs of cracking. This innocent fun loving girl Bayley is making the champions' skin crawl and makes her sick to her stomach.

Paige lays out Bayley after a match and lets her know exactly what she thinks of her. I was born into this, I wrestle , my mother wrestles, my sister wrestles, my brother wrestles, this is in my blood, I have been doing this for years, I was doing this when you were playing with your dolls, I am the real deal, I am the champion and placing the belt next to the face of Bayley, Paige states "this is the closest you will ever get to the women's championship".
It all comes to a head at the pay per view, Paige may be confident on the outside but she is not going to understimate her opponent, Bayley had pinned Paige, Bayley has cost her a match against Sasha Banks, Paige would not lose what matters most to her, the title. Flanked by Heyman the champion enters the ring staring down her challenger. For the majority of the match, Paige taunts Bayley at every chance she gets.

Slaps to the head, kicks to the face screaming insults, everything including the kitchen sink. Time after Time, Bayley fires up, she will not stay down. frustration builds for the champion, a Paige Turner is not enough and Bayley kicks out of The Rampaige. It is time for the PTO but Paige cannot lock it in, no matter how hard she tries, Bayley is not going down. Paige stands on the top rope. Playing possum Bayley rises from the mat to deliver a second rope Bayley to Belly 1.....2.......3  New Champion and new star made in the shape of Bayley. Paige was an annoying heel this whole match who finally paid for all her trash talk. The better woman won and Bayley overcame the odds.

Thus, brings an end to another session of Creative has nothing for you, Paige is only 23 years of age and is a two time champion. She has plenty of years left and is a good wrestler. By giving her Heyman, she could become better on the mic and she could really benefit from being the first ever Paul Heyman Girl. Plus, she has always been better as a heel/tweener. Going back to her roots could really help her connect with fans once more instead of being stuck in multi women matches at Mania against the likes of Lana. I hope you enjoyed this edition and I look forward to seeing you next time!