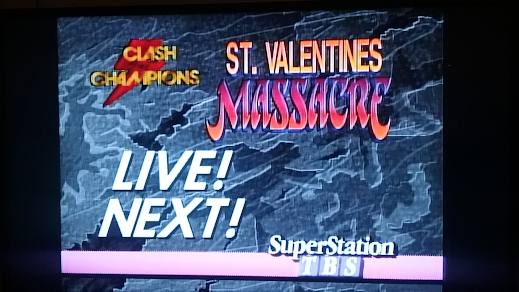 Hello and welcome to another edition of Seanomaniac Wrestling Reviews, the only wrestling review series on the internet that will always send that tweet when they really shouldn’t! Looking at you Tony Khan! Anyways, it’s The WCW Clash of The Champions V: St Valentine's Massacre! Ricky The Dragon Steamboat is here, Butch Reed is here! Tenryu is here! The AJPW star makes his way to the USA, teaming with The Road Warriors against Sting, JYD and Michael P.S. Hayes! This card is not stellar, looking like one of the weaker cards I have seen from this company but maybe I will be surprised going into this one, not too optimistic though!

Paul Jones is still a thing at this stage? Incredible as this looks like a tune-up match for Lane and Eaton considering their battles with the original Midnight Express. Lane to start with Russian Assassin 1, Lane showcases his educated feet with Assassin 1 complaining like a mad man over this. Assassin chokes Lane and throws him down, the ring is looking different with no logos and that boxing style pads present as Assassin 1 continues to choke down Lane. Throat thrusts and thrust kicks from Lane, Lane tags in Eaton. Eaton works the arm before eating a scoop slam, in comes Assassin 2 who misses an elbow drop. Eaton and Lane are working well together now with a big clothesline on Assassin 2, drop toehold and elbow drop combination from The Midnight Express.

Eaton works the headlock before tagging to Lane, Paul E. Dangerously talks massive amounts of trash before the match at The Chi-Town Rumble. Side headlock takedown from Lane, Eaton comes in and does the same but Assassin 2 brings Eaton to the corner of The Assassins. Eaton fights his way out, Jones and Cornette look like they are going to throw down. Lane smashes Jones, everyone is being theatrical on the floor. Eye rake from Assassin 2, Lane and Eaton land double elbows, The Russians are sent into one another. Cornette cracks one of the assassins in the spine. This is glorious cheese at this point, Cornette is strutting around ringside. Assassin 2 sends Lane to the buckle, Lane fights back with elbows and thrusts. Assassins switch places on the floor possibly, I don’t have a clue to be honest but yes I do believe I am correct as JR backs me up on commentary.

Double clothesline on Lane, chokehold from Assassin 2. Lane is sent to the floor, Cornette protects his man. Bearhug from Assassin 1, Lane fights out but an elbow to the spine stops Lane. Assassin 2 comes in with a nice snap suplex, bearhug on Lane. Lane hip-tosses Assassin 2, Assassin 1 attacks Lane from the apron. Lane fights back from his knees but clubbing blows stop Lane. More bearhugs boys, scoop slam and elbows from The Assassins. Irish whip with Lane landing a flying crossbody for two, Assassin 1 tags in Assassin 2 who lands a massive elbow drop for two. Scoop slam into a Boston crab, single leg Boston crab actually with the ropes for leverage. Eaton is fired up and attacks Assassin 1, more tags from The Assassins. The Russian Missile misses, Lane dodges and now is it time for Eaton.

Eaton lands massive rights, double bulldog from Eaton. Superkick to Assassin 1, Eaton is tossed to the floor so The Assassins go after Lane but they bang heads, superkick from Lane and a beautiful Rocket Launcher for the win.

Quite a poor match when you look at it, Russian Assassins are very basic inside of that ring, the repeated bearhugs really slowed down the action for me, no real heat to this one with the fans just waiting for Midnight Express to steamroll these guys, no real surprise considering this is 5 days before a PPV though.

Winners: Midnight Express over The Russian Assassins via Rocket Launcher!

Nice moustache on Casey and a sweet jacket while we have Hacksaw Butch Reed here fresh off a disappointing run in the WWF. We have a lock-up and a clean break from Reed, Reed fires up the crowd. Another lock-up with an arm-drag from Reed, Reed is feeling confident at this moment and time. Another lock-up, could we have another clean break? No Reed works the ribs but eats a massive dropkick and arm-drag into an arm-bar. Casey is referred to as a youngster yet he looks like he is closer to mid-30s with the look he has for himself here. They trade arm-locks, Casey lands a leg drop into the arm. We cut to two people kissing in the crowd, the fuck?

Reed continues selling for Casey, Reed needs the rope to escape the arm-hold. Reed complains about something, Casey looks at him as if to say are you for real? Reed stalls a fair bit before working the arm of Casey, they work the arm with Reed pulling the hair before Casey reverses Reed. Reed has his arm worked over again and again before powdering, we are going to have a test of strength. Casey gets the upper-hand before Reed lands a massive right to the face and dumps Casey to the floor. Hot-shot from Reed, Casey is stuck on the floor. Reed applies a chin-lock in the ring, Casey almost escapes but Reed uses the hair back into the reverse chin-lock. Casey lands a shoulder block before Reed pulls Casey to the floor.

Suplex back into the ring from Reed, two for Reed. Casey battles back with massive rights, dropkick is dodged by Reed. Another reverse chin-lock with Reed using the ropes for leverage, Casey escapes and bangs Reed into the buckle. Ten punches from Casey, big hip-toss. Chops from Casey, monkey flip and a dropkick. Make it two, Casey dives into the arms of Reed who lands a military press slam and now Reed climbs high. Diving shoulder tackle from the top rope with Reed winning.

What an awful match, I have no idea what the obsession is with putting wrestlers in 15 minute plus matches with jobbers, hurts Reed and exposes the weaknesses and flaws in Reed’s game. Just an awful match, cut about 14 minutes from it and you should have how long the match deserved to go.

Another jobber match that goes over 10 minutes, this maybe an early contender for worse show I have reviewed in 2022, it is simply awful to have to watch this for that amount of time. Luger should have killed him in three minutes, not a fan of this PPV.

Winner: Lex Luger over The Blackmailer via Superplex!

Freebird rule in effect here as it will be Rotunda and Williams to defend the championships, Sullivan and Williams won the championships at Starrcade 88. Rotunda to take on Rogers, nice fireman’s carry. Waist-lock takedown from Rotunda, showcasing his superior wrestling skills. Rogers grabs a side headlock where we have leap frogs before a flying crossbody from Rogers for two, in comes Williams who decks Rogers with a massive clothesline. Williams misses an elbow drop, tag to Fulton. Double team and dropkick on Williams, Fulton is dancing now which is funny because while meant to be pretty boys, I ain’t convinced by the looks of Fulton. Williams shoulder blocks Fulton, side headlock with a drop toehold by Fulton. Williams tackles and slaps on a reverse chin-lock on Fulton. Fulton ducks Williams who falls to the floor before they start shoving one another, right hands by Fulton who is tackled down by Williams.

Tag to Rotunda who rams Fulton off the buckles, Fulton and Rogers regain control against Williams but a dropkick has little effect on Williams. Side headlock from Rogers, Williams shoves Rogers to the corner. Right hands by Williams, back body drop from Williams. Tag to Rotunda who lands an elbow,  Rogers fights back with elbows and right hands before a tag to Fulton. Knee-lift from Fulton for two, whip to the buckle. Ten punches from Fulton, Williams clotheslines Fulton to the floor. Crowd is chanting for Rick Steiner so that is telling you all you need to know at this point, Rotunda lands a great dropkick. Tag to Williams, diving axe handle from Williams. Arm-bar from Williams, tag to Rotunda who lands an atomic drop and an elbow drop.

Again, not really interesting despite the quality of the workers in the ring, I feel I have not seen Williams slaughter anyone which is very frustrating to see considering the idea of this match is big-men vs smaller team. Such a disappointing card at this moment and time.

Winners: The Varsity Club over The Fantastics via Stomp To The Head!

Leapfrog and ducks, hip-toss from Steamboat. Arm-drag into the arm-bar, Bradley battles back but misses a top rope splash. Steamboat lands a double chop and goes to the top, Diving Judo Chop followed by The Diving Crossbody for the win!

Another match that goes too long with no real heat or urgency, this is easily one of the worst shows I have seen in quite some time.

Rip Morgan is without The Sheepherders who are in the WWF so it looks like it is going to be a long decline for poor old Rip Morgan while Rick Steiner continues to get over by throwing people around the ring. Morgan tees off with knees before a clothesline from Steiner, Morgan brings Steiner to the corner with the ramming into the buckle not working on Steiner at all. Clubbing blows into the side headlock and a shoulder block before Steiner lands a powerslam for two. Steiner backs Morgan to the corner, right hands from Steiner. Whip to the opposite buckle and Morgan lands a big boot, flying elbow from Morgan for two.

Reverse chin-lock from Morgan, Steiner fights out and lands a scoop slam but the elbow drop misses. Morgan lands a bearhug but Steiner counters for a belly to belly suplex, another squash and this actually ends quickly so congrats after your previous terrible matches.

Sting, JYD and Hayes are meant to challenge for the championships but Kevin Sullivan says no that is not going to happen as he locks the cage and the babyfaces cannot make it to the ring so we have Tenryu and The Road Warriors vs The Varsity Club? Sweet baby Jesus, The Varsity Club clear the ring and celebrate like babyfaces which is bizarre, fans are throwing shit in as they are not pleased with bait and switch. Road Warriors clear the ring with Tenryu, Sullivan is in the ring with Animal. Chops and clothesline have no effect, Animal clotheslines everyone.

Hawk and Sullivan are wrestling with Hawk slugging with everyone, flying shoulder tackle before a tag to Tenryu, Rotunda and Tenryu are going to wrestle. Eye rakes before Tenryu chops and dropkicks Rotunda, constant shots of the babyfaces who want to get to the ring. Williams and Tenryu battle, Tenryu kicks Williams and lands his enzugiri to the back of the head. Clothesline from Hawk to the corner, team babyface are freed from their locked cage. Rotunda and Animal are on the floor, Animal is sent into the ring-post and guardrail. Sullivan sends Animal to the floor, the match is breaking down. Animal brawls back with Sullivan, they bang heads in the middle of the ring. The match breaks down with every brawling, big DQ.

What a fucking waste of time this was

WCW’s Clash of The Champions V is a contender for one of the worst shows I have ever watched for the purpose of reviewing, it’s a longer episode of Worldwide, Heat, Superstars you know what I mean. It is a joke to see so many jobber matches back to back on a card, nothing delivered and nothing even built up to the coming Chi-Town Rumble beyond Steamboat and Flair’s confrontation, this was a terrible show from top to bottom. Avoid this like a plague, one of the worst I have ever seen. Thanks for reading and remember: there’s always another night!