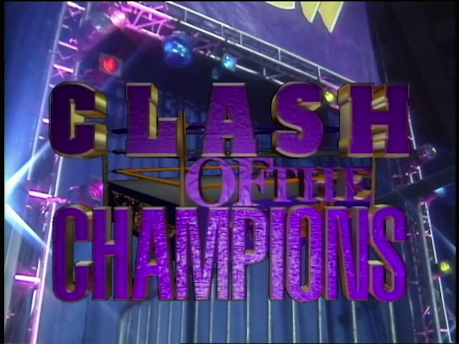 Hello and welcome to another edition of Seanomaniac Wrestling Reviews, the only wrestling review series on the internet that will be sleeping normally during Wrestlemania Weekend! It’s time for another Clash of The Champions from WCW, it’s Clash of The Champions XXI! We have Sting vs Rick Rude, Erik Watts competing with a 10,000 dollar bounty on his head, Madusa vs Paul E. Dangerously and Windham & Rhodes defending their championships against Ricky Steamboat and Shane Douglas!

We kick things off with recaps before Pillman vs Brad Armstrong, not putting this down as a match as it is over in seconds, Pillman targeted the leg of Armstrong and took it out before the bell, Armstrong still wants to fight and falls victim to a chop-block, game over.

Eaton and Watts to start, Eaton shoves Watts to the ropes and Eaton talks a lot of trash. Side headlock from Eaton, Watts drop-downs but Eaton slaps the head of the boy. Watts slaps back, Eaton lands the elbow and applies the abdominal stretch but Watts reverses with an arm-drag. They mess up a spot all on Watts unfortunately, Anderson comes in and works the arm before Watts reverses. Anderson has his arm wrenched by Sasaki, Anderson tags in Eaton. Side headlock by Sasaki, shoulder block on Eaton. Eaton lands a monkey flip but Sasaki answers back with a dropkick. Sasaki pushes Eaton to the corner, chops from Sasaki and a shot to Anderson. Anderson pulls Eaton out of the way and Sasaki hits the buckle hard.

Hayes lands a kick on the floor to Sasaki, Anderson chokes Sasaki on the middle rope. Hayes lands a cheap blow, Eaton and Anderson choke Sasaki. Arm-bar from Anderson, tag to Eaton. Sasaki lands a powerslam on Eaton, tag to Watts. Irish whip and a monkey flip into right hands, back body drop on Eaton. Match breaks down, powerslam by Watts for two. Sasaki chops and shoulder thrusts Anderson, Eaton rakes the eyes of Watts. Eaton tries an axe handle, Watts lands a forearm to Eaton and an STF for the win.

My boys putting over Erik Watts?? I don’t even care at this point to be honest, Watts must not see the value in having Anderson and Eaton, shocked to see how The Dangerous Alliance felt apart and fell so fast. Watts looks green as goose-shit though, hopefully it is tag matches in his future for another 6 months.

The round starts with Badd peppering Flamingo with jabs and hooks, Flamingo cheats behind the referee’s back with Vegas on the apron and lands a scoop slam and boots before Badd fights back and staggers Flamingo. DDP and Vegas pour water in the gloves of Flamingo to make them heavier, DDP distracts Badd who does not see Flamingo’s right hook. Flamingo wins as Badd cannot beat the count. Comedy match played well, good stuff to add fuel to their feud.

Winner: Scotty Flamingo over Johnny B. Badd via TKO!

Scorpio is the surprise partner of Simmons, the duo run to the ring and batter the heels, plancha to the floor from Scorpio. Why is Tony Atlas involved in this feud? No idea about that one, Simmons and Barbarian slugging it out. Irish whip reversal by Simmons and a massive hip-toss, dropkick for Atlas. Spinebuster on Cactus, Cactus and Scorpio are legal now. Forearms from Scorpio who lands a moonsault for two, dropkick by Scorpio. Tag to Simmons, Atlas comes in and clobbers Simmons, tag to Cactus who lands headbutts. Barbarian lands a back body-drop, two for Barbarian. Snap-mare and tag to Cactus, Simmons stops Cactus with a boot. Tag to Scorpio, dropkicks all around. Noggin-knocker by Simmons, Atlas dumps Scorpio to the floor. Barbarian misses a boot and decks Atlas, Simmons clotheslines Barbarian and Cactus to the floor and Scorpio lands the 450 Splash for the win.

Great debut here for Scorpio, nobody had seen an athlete like that in WCW yet and that 450 Splash was clean. Put that light heavyweight championship on Scorpio now.

Dangerously slapped Madusa and called her a hooker, Madusa slapped back and we have a match. Dangerously attacks a masked figure thinking it is Madusa but she is here for a fight, roundhouse kick to the head and Madusa is on fire. Scoop slam and massive kicks, punches in the corner. Knees in the corner and Dangerously is on the floor, Medusa chases Dangerously around the ring and carries him back ringside but Dangerously takes control and lands an axe handle before Medusa lands a clothesline and kicks Dangerously again. Knees to the head, Dangerously runs away and time expires. Are they paying this off at Starrcade? Why could she not just pin him?

They have not met since Rude defeated Sting for the United States Championship, eye-rake by Rude. Sting is bounced off the buckle, elbows to the neck by Rude. Rude poses, Sting fights back and lands rib kicks on Rude. Rude begs for mercy, Sting stomps down on the ribs. Sting lands a front suplex for one, make it two. Sting continues kicking the ribs and punching the ribs, camel clutch from Sting. Abdominal stretch from Sting, Rude counters and rakes the eyes of Sting. Right hand by Rude, make it two. Sting meets the buckle, forearms to the spine. Sting turns the tide and suplexes Rude onto the top rope, Sting keeps kicking the ribs before missing a Stinger Splash against the guardrail. Rude lands a diving chop back in the ring, two as Sting places his foot on the ropes.

Scoop slam by Rude, Rude lands an elbow to the head for two. Camel clutch from Rude, another scoop slam from Rude. Suplex by Rude, scoop slam by Rude. Camel clutch, Rude drops his weight on Sting before Sting dodges. Rights and lefts by Sting, the scoop slam backfires though as Rude lands on top. Elbow to the head by Rude, Rude tries to pin Sting on the ground a few times but Sting continues to power out which frustrates the United States Champion. Hard Irish whips to the buckles back and forth, bearhug from Rude. We go back and forth in the bearhug before Sting slaps on a sleeper, jaw-breaker counter from Rude. Rude climbs high and Sting shoves Rude off the top rope, inverted atomic drop and regular atomic drop. Face-buster from Sting for two, diving crossbody for two. Sting goes high again, Rude counters with a punch. Knees to the ribs by Rude, Rude Awakening attempt. Sting counters and lands a Stinger Splash, Scorpion Death-Lock but the time-limit expires and it goes to the judges’ decision and it goes in Sting’s favour.

That was not great at all, Rude again being such an inconsistent figure inside of that ring for me. What I will give Rude is this one is his selling of his ribs, once the injury is established, Rude never stops selling his ribs throughout every exchange, Rude is hobbling around as the match ends, putting over the extent of the damage done in the ring but how I wish the action and excitement inside of the ring matched Rude’s selling throughout the match.

Douglas and Rhodes to start, lock-up with clean breaks. Side headlock by Douglas, small package by Douglas for two. Rhodes counters an Irish whip for a backslide, two for Rhodes. Rhodes and Douglas tussle around the ring, more clean breaks before Douglas lands an arm-drag. Rhodes counters with his own arm-drag, arm-bar from Rhodes. Shove off by Douglas, shoulder block by Rhodes. Schoolboy for two, Douglas sends Rhodes to the mat and we have a stalemate off a dropkick. In comes Windham and Steamboat, arm-drag from Windham but Steamboat counters with a head-scissors. Both men arm-drag one another to the floor, they are shoving and going to brawl but their partners calm their down.

Big lock-up, chops by both men. Steamboat chops and atomic drops Windham, arm-drag into the arm-bar. Douglas lands an elbow and a suplex on Windham, arm-bar from Douglas. Windham pushes back the face of Douglas, massive forearms from Windham. Windham misses a corner splash, arm-bar with a tag to Steamboat who lands a diving axe handle and a kick to the face for two. Tag to Douglas, double back body drop for two. Arm-bar from Douglas, Windham lands an elbow and in comes Rhodes with an elbow for two. Tag to Windham, double dropkick on Douglas for two. Tag to Rhodes, suplex and elbow drop for two. Sunset flip counter by Douglas for two, arm-bar from Rhodes. Tag to Windham who lands the elbow to the arm, chop and tag to Rhodes who works the arm with a hammerlock. Rhodes tries to half-nelson Douglas into the pin-fall. Knees to the arm and a tag to Windham, chop into a cover for two.

Double clothesline from the champions for two, Rhodes is in and slaps on a reverse chin-lock. Windham and Rhodes continue to punish Douglas, flying lariat by Windham for two. Tag to Rhodes, kick to the ribs. Side headlock by Rhodes, takedown for two. Knees to the arm from Rhodes, Douglas fights back and lands a middle rope crossbody for two. Irish whip by Rhodes, Douglas dodges the dropkick and tags in Steamboat. Shoulder blocks by Steamboat for wo, flying crossbody for two. Irish whip but Rhodes lands a hip-toss and a dropkick for two, small package for two. Flying shoulder block by Rhodes for two, Steamboat drops down and Rhodes lands a headbutt to the groin. Rhodes is concerned and Windham wants Rhodes to pin Steamboat.

Windham shoves Rhodes, Rhodes talks about showing sympathy. Windham says screw that and lands an elbow drop for two, Steamboat sells the headbutt to the groin and to drive home the point, Windham lands the inverted atomic drop for two. Windham tells Douglas to piss off, Windham tells Rhodes to piss off also. Second inverted atomic drop, Windham lands his flying lariat bur Rhodes is not happy with Windham. They trade shots now, Douglas is in the ring. Belly to belly suplex and Douglas wins the match, we have new champions! After the match, Windham goes berserk and wipes out everyone cementing his heel turn.

Great tag team wrestling here, Windham and Rhodes have been favourites of mine the whole year through their battles with The Dangerous Alliance. They work the arm perfectly in this match, Douglas sells it well and the finish is great too, sold to perfection. Steamboat shows that the headbutt was a devastating blow, Windham delivering the inverted atomic drops showcasing how much of a prick that he truly is, is great stuff. I am not thrilled with Steamboat being stuck in the tag division but if it means more awesome matches, I can stomach it.

WCW Clash of The Champions XXI was like most Clashes, very middle of the road for the majority, we do get the big heel turn of Barry Windham here which I hope leads to more awesome matches from him, I can imagine Rhodes vs Windham will be quite entertaining. However, my fear is I won’t get to truly enjoy it as I know Starrcade is next and the stupid Battle Bowl concept is back which means plenty of dumb tag matches right? Anyways, you have a great tag team championship match here, mostly comedy and not much of substance everywhere else. Thanks for reading and remember: there’s always another night!