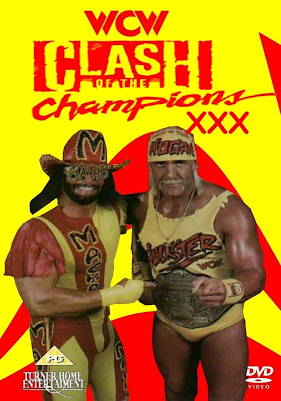 Oh my lord the reign of Johnny B. Badd is already over, what a failure it was from WCW. Old reliable Arn Anderson is champion once more, can Anderson bring something out of Badd? Look at The Stud Stable, Parker is the proud manager of the fucking Television Champion, how the mighty have fallen eh?

Camera isn’t great quality on the wide shot, they lock-up and Anderson lands knees and clubbing blows. Badd blocks punches and lands a knee-lift on Anderson, Badd is fired up on this night. More clubbing blows by Anderson, snap-mare and a knee-drop, Anderson climbs high. Badd dropkicks Anderson to the floor, Plancha to the floor. Double axe handle for two, arm-bar from Badd. Japanese arm-drags into an arm-bar from Badd, Anderson headbutts Badd low. Knees to the spine, Irish whip but Badd catches the foot. Enzuigiri misses for Anderson, elbow drop by Badd. Anderson manages to hot-shot Badd when Badd tried a leapfrog, Anderson chokes Badd with the middle rope. Colonel Robert Parker kicks Badd on the floor, left fist to the gut from Anderson. Stomp to the ribs, two for Anderson. Reverse chin-lock from the champion, Badd escapes but runs into an elbow. Elbow drop from Anderson, Anderson calls for the DDT.

Figure four is blocked by Badd, Anderson is ran into the buckle. Left shots from Badd, back body-drop and a clothesline by Badd. Make it two clotheslines, head-scissors takedown by Badd. The Kiss that don’t miss! Meng is on the apron, Parker wakes up Anderson with water. Meng throws Anderson in the ring, Badd was chasing Parker but ran into the DDT and Anderson wins this match!

Decent at best, I like the two men involved and I am disappointed with how they have booked Badd, a lot of the 1993 acts that achieved big in the year have been decimated throughout 1994 and into 1995, it looks like little will change.

Winner: Arn Anderson over Johnny B. Badd via DDT!

They lock-up, Eaton is the bigger of the two. Arm-drag by Wright, Eaton is not happy about that. They lock-up again, wrist-lock by Wright. Fujiwara arm-bar from Wright, Eaton grabs the head to alleviate some pressure. Shoulder block and scoop slam by Wright, flying headbutt. Arm-bar from Wright, Eaton lands a knee to the ribs. Right hand by Eaton, another one from Eaton. Whip to the buckle, Wright flies over him and lands a head-scissors and an arm-drag. Eaton begs for mercy, uppercut by Wright for two. Wright tries a flying headbutt and smashes his throat off the ropes. Knee-drop to the throat by Eaton, Eaton chokes Wright on the bottom rope for two. Reverse chin-lock from Eaton, Wright escapes and lands uppercuts. Irish whip and a back body-drop, spinning wheel kick and Wright climbs high. Missile dropkick for two, Eaton begs for mercy again.

Eye-poke by Eaton, Eaton lured him into that one. Whip to the buckle and Wright leaps to the top rope and lands a diving crossbody for two. Wright lowers his head off an Irish whip, swinging neck-breaker by Eaton. That is the setup, Alabama Jam from Eaton. 1….2….Wright kicks out of The Alabama Jam! Wright is hurled to the corner, Eaton roughs up the ribs before whipping Wright across the ring. Wright leapfrogs Eaton and runs to the opposite buckle and lands a diving crossbody for the win!

I love Eaton, so simple yet so good inside of that ring. From the right hand to the neck-breaker to The Alabama Jam, few are better than Beautiful Bobby. Perfect opponent to make Wright look good and Wright does look good coming out of this match, the youngster continues to pick up steam.

Well they did it, the hot new team in the division are the champions. Poor old Bagwell is a loser once more, these poor geeks are overshadowed by The Nature Boy who is retired coming back to WCW because well we booked ourselves into a corner there didn’t we?

Booker and Bagwell start, slap by Booker. Forearms and right hands by Bagwell, Booker is whipped to the buckle. Knee by Booker, knees on the ropes by Booker. Bagwell ducks the side-kick and dropkicks Booker to the floor, Stevie Ray comes in and is knocked down by the challengers. Back body-drop by Bagwell, Patriot comes in and works the arm before Booker brings Patriot to his corner. Harlem Heat punish the shit out of Patriot, Irish whip by Stevie Ray but Patriot ducks and lands a flying forearm. Wristlock from Patriot, tag to Bagwell who lands a diving axe handle. Bagwell tries working the arm, Stevie Ray elbows Bagwell in the eye. Choke against the ropes, Bagwell tries a crossbody but gets slammed to the ground. Stevie Ray misses an elbow and Bagwell works the arm but Stevie Ray knees his way out of the hold. Booker comes in and lands pump kicks on Bagwell.

Forearms in the corner, Bagwell is whipped to the corner. Corner sunset flip by Bagwell for two, Patriot comes in and lands a leg drop to the arm. Patriot lands a belly to belly on Booker, tag to Bagwell. Bagwell works the arm some more, wrenching the arm but Booker rakes the eyes. Whip to the buckle, Stevie Ray helps his brother avoid a monkey flip and a Harlem Sidekick takes down Bagwell. Stevie Ray comes in and batters both challengers, Booker has Bagwell on the ropes. Stevie plants a kick to the ribs, more pump kicks from Stevie Ray. Clothesline for two, tag to Booker. Flying forearm from Booker, reverse chin-lock. Bagwell fights out and both men try crossbodies and both men are wiped out. Sherri and Stevie Ray are distracting the referee so nobody sees the hot-tag for Patriot. Right hands all around, the referee has lost control.

Communication breakdown, Sherri has her purse and is on the apron. Booker gets clobbered with the shoe and Bagwell rolls-up Booker with an O’Connor roll for two. Stevie Ray is pretty late on the save but Stevie Ray pump-kicks Bagwell into oblivion allowing Booker to roll-up Bagwell with a handful of tights.

This was rough, I like Harlem Heat with Sherri and I have been forced to watch Bagwell & Patriot stink it up with Orndorff and Roma for like 6 to 8 months. I am not sure what is the insistence on pushing Bagwell and whatever partner he has as champion contenders but it’s never ever clicked for me.

The Guardian Angel continues to be a referee and enforce law & order, this gimmick went south fast. How long before I see him fight Vader again huh? Anyways, we have a rematch from one of the most tedious affairs I had the displeasure of watching at Starrcade 94. Avalanche clubs the shit out of Sting, knees in the corner. Avalanche misses a splash, Sting kicks and dropkicks Avalanche who falls to the floor. In the ring, Sting kicks and punches Avalanche before biting off more than he can chew, Avalanche falls onto Sting. Elbow drop and leg drop by Avalanche, Sting is hurting now. Forearm shots and Avalanche backs his backside into Sting, Sting battles his way back into the match. Stinger Splash in the corner, make it two. 4 Stinger Splashes and a scoop slam, Scorpion Death-Lock! Hold on another referee comes down and says Avalanche gave up? Guardian Angel didn’t make the decision so Sting and Guardian Angel are going to do battle now. Well I think Guardian Angel needed a heel turn to spice him up but what is that finish? The babyfaces come out and help The Stinger, end scene.

Definitely better than the Starrcade match because this was brief and not a giant waste of time and it seems they got to where they needed to be with Guardian Angel turning heel but it’s not exactly a thrilling opponent for Sting who is definitely behind Savage and Hogan in the grand scheme of things which makes me so sad.

Winner: Sting over Avalanche via DQ!

The Three Faces of Fear vs The Monster-Maniacs

Kevin Sullivan and The Butcher, Sullivan is doing his best Bruiser Brody impression on his way to the ring while Savage and Hogan are no longer the Mega-Maniacs but Monster-Maniacs. Savage’s first big match on WCW TV and it’s second fiddle to Hogan, some things don’t ever change eh?

Hogan to start with Butcher, Butcher shoves back Hogan. Hogan whips Butcher to the corner, Savage gets a shot in from the apron. Right hands from Hogan, ten punches in the corner. Corner clothesline, Butcher begs for mercy. In comes Savage, diving axe handle and an elbow to Sullivan, noggin-knocker. In comes Hogan who lands some throat thrusts, Butcher has his head bitten by The Hulkster. Butcher manages to capture Hogan in The Sleeper, Savage tries to make the save but cannot, Hogan is going to sleep. Sullivan and Butcher celebrate and Savage gives Hogan The Reviving Elbow! Hogan and Savage clean house, Savage comes in legally now with a double boot to Butcher. Savage is sent to the ropes, Sullivan lands a blow from the apron. Savage is back-dropped to the floor, Hogan looks to protect his partner.

Sullivan sends Savage into the ring-post, Savage is tossed into another ring-post. Butcher holds down Savage, Sullivan chops at Savage. Right hands in the corner and stomps to the gut, snap-mare and a stomp to the face. Tag to Butcher who chokes Savage with the ropes, more chops from Butcher. Savage continues to get destroyed on the floor by Sullivan, Butcher places Savage in the tree of woe. Sullivan smacks Hogan, knees to the ribs of Savage. Hogan is irate but cannot enter the ring legally, Vader looks on from the crowd. Sleeper from Butcher but Savage lands a jaw-breaker, tag to Hogan and both Sullivan and Butcher are figuratively wetting themselves, noggin-knockers and right hands. Boot for Butcher, scoop slam. Diving Elbow Drop by Savage on Butcher followed by The Atomic Leg Drop and this is over.

Our big heel faction getting destroyed once more in WCW, what is the point of having these guys be the number one faction when they can’t do anything to Hogan. From Avalanche to Butcher to Sullivan, they haven’t a hope against Hogan and Hogan has beaten them at every turn, what does the future hold for Vader? No idea but I cannot imagine it being good. Hogan no-sells a powerbomb from Vader which tells me all I need to know.

Having watched 30 Clashes now, I can say much like Saturday Night Main Event, they were far less memorable moments than I would have thought, you hear about the great matches but mostly these are squash shows with little development and by 1995, the fans had figured that out and that’s why we are being reduced to 2 Clashes a year, I can say I have seen some good stuff on those cards but this card mostly gets a thumbs-up for letting me see some Bobby Eaton. Not super eventful unless you want to see Hogan no-sell the threat of Vader. Thanks for reading and remember: there’s always another night!